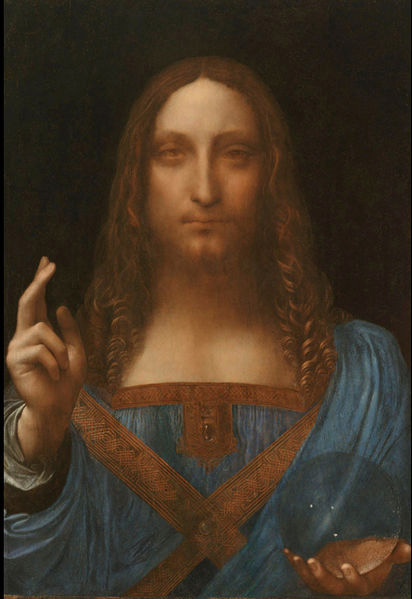 In early November when I opened Paul’s envelope containing an L.A. Times article entitled “The Lost Leonardo,” I looked at the stunning color photo of “Salvator Mundi” and felt thoroughly confused. It immediately struck me as being both an authentic Leonardo, and NOT a Leonardo. The masterpiece was shown at The National Gallery in London from Nov 9, 2011 to Feb 5, 2012 as part of their exhibition, “Leonardo da Vinci: Painter at the Court of Milan.” This beautiful portrait of Christ as “Savior of the World,” depicts His face softened by the master’s famous sfumato dry-brushing technique. However, the drapery, embroidery, right hand raised in benediction and left hand holding a crystal orb representing the world, are painted in clear detail. The face is so hazy as to seem like a vision or an image in a dream. Many art historians and experts question the origin of the painting. Its source is the subject of significant controversy. I request indulgence to add my ideas to the debate.

I wrote to Paul immediately, as I often do when trying to sort out my own thoughts, feelings and logical arguments about virtually any subject:

Yesterday your card with the article and photo about “The Lost Leonardo” arrived in the mail. I have spent some time considering it. The painting is compelling and very well made, but I have serious doubts that it is entirely a Leonardo. Actually, what I think is that this painting is from the studio of Leonardo and that the master’s hand is in it, but that it may have been largely painted by one of his apprentices. While the image is very haunting and beautiful, it has some serious problems that Leonardo never exhibited:

Now, having listed my concerns, I must quickly add that there are some elements of the work that are very Leonardo-like:

Finally, stepping back and taking in the overall effect of the painting, it feels both overly dramatic and too rigid for a Leonardo to me, and I still have the feeling that it was largely executed by one of his apprentices under the guidance of Leonardo. It feels like a painting made by a younger artist than the others we know are from the master’s hand. This beautiful image is extremely dramatic in its ghostly quality on a dark background, and especially in the gauzy quality of the not quite matching eyes. And yet the lower half of the painting — the drape and ornate border ribbons are so rigidly and meticulously rendered as to seem like they might belong to a different painting altogether. The more I look at this work, the more I see the marks of two artists — the master’s hand is in part of the face and the raised hand. The apprentice is more and more obvious in the rest of the painting.

I was still very bothered by the painting and continued to stare at it for hours and meditate upon it. Suddenly I saw an answer – an explanation that completely satisfied me. As I stared at the “Salvator Mundi,” I found myself transported in my mind back to Leonardo’s studio, where several paintings were being produced by the master, with the “help” of his apprentices. In his studio Leonardo was a teacher, seeking ways to instruct his young apprentices. The “Salvator Mundi” commission presented a perfect teaching moment because it was an uncompromising full-face, symmetrical pose. If I were Leonardo, I would have drawn a line right down the middle of the painting, completed one half of it and given it to an apprentice to complete the other half in the same manner as a mirror image. As I scoured the painting for evidence supporting my hypothesis, I was compelled to write to Paul again: 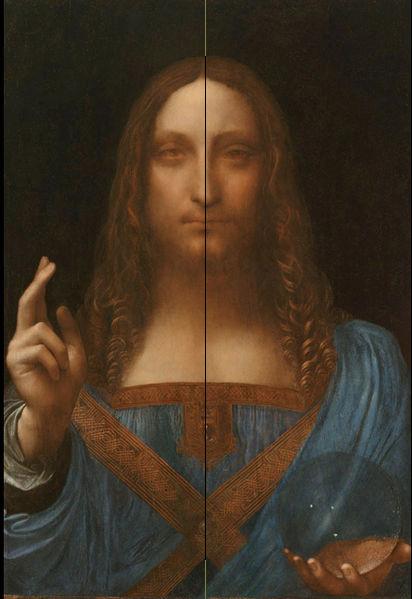 Again, it is my theory that Leonardo used this uncompromisingly full frontal pose to draw a line straight down the middle of the canvas and paint one side of it himself (the raised hand side) while instructing an apprentice to copy his work on the shaded side. The only exception is that I believe the apprentice was instructed to do all the intricately detailed ribbon and jewel and front fabric panel work. It looks to me like Leonardo painted the entire raised hand and arm including the drapery as well as that side of the head and face, while the apprentice did his best to finish the other side.

After discussing all of this with Paul by phone, I was truly hooked by the compelling mystery of this disputed “Lost Leonardo,” and several months of information gathering have ensued, during which I have become more and more convinced that the painting is a “collaboration” between Leonardo and one of his apprentices. One of the techniques I used to consider my theory was to flop the painting and cut it in half down the middle, matching the two Leonardo halves together and the two halves that I believe were painted by the apprentice as well. The results are rather striking:

This is the Leonardo half of “Salvator Mundi” paired with its own mirror image. To my eye this is clearly a Leonardo painting in every respect – the confident and focused gaze looking directly into the viewer’s eyes, the organic eyes and eyebrows, the refined nose, the mysteriously half-smiling mouth, the hair, the anatomy of the hands. All of it is quintessential Leonardo, and the result is a powerful, commanding, confident image of Christ.

By stark contrast, here is the apprentice’s half of “Salvator Mundi” paired with its own mirror image. The eyes, eyebrows, nose, and mouth, while compelling, do not look like Leonardo’s work. Moreover, the combined effect depicts a thin, weak, worried face with a flat nose and pursed thin lips. Leonardo’s faces are almost always sublimely serene with full sensuous lips, dimpled in the corners to provide that signature enigmatic inner Mona Lisa smile. That trademark characteristic of all Leonardo faces is entirely missing in this mirrored pairing of the apprentice’s side of the painting. While we can clearly see that this side of the painting is heavily influenced by Leonardo, it is not the master’s work, even though some may prefer it to the more robust and serene Christ image entirely by Leonardo.

According to www.italian-renaissance-art.com/Salvator-Mundi.html, there are 20 versions of “Salvator Mundi.” It is evident that 19 of them are copies of this painting produced in Leonardo’s studio, because infrared imaging has shown several “pentimenti (artist’s alterations) in Leonardo’s painting. Those final changes are mimicked in the 19 copies, but, of course, infrared imaging shows no changes in their painting process. The Leonardo image is composed of pigments characteristic of his work, and it is painted on a walnut panel that was produced in the correct era, consistent with other Leonardo paintings. His depiction of a crystal “mundus” is a unique innovation that also links the painting to the master, because he was something of a rock crystal expert.

There is strong documentary evidence that in 1506 Louis XII of France commissioned Leonardo to produce a painting entitled “Salvator Mundi,” which was completed in 1513. The work is documented to have been in the collection of King Charles I in 1649 and sold at auction by the Duke of Buckingham’s son in 1763. The painting fell upon hard times after that, and was lost until 1900, when it was purchased by the British art dealer Sir Frederick Cook. Several very poor restoration attempts made the painting very difficult to authenticate, and it was sold at auction for about $125 in 1958. In 2005 it was acquired by a consortium of U.S. art dealers and properly restored. After a seven-year authentication process, “Salvator Mundi” is now generally believed to be a Leonardo da Vinci painting worth somewhere in the neighborhood of $100 to 200 million. For its recent exhibition, The National Gallery in London cataloged the painting as a newly discovered Leonardo.

To all of these inquiries, studies, disputes, discussions and controversies, I add my own humble little theory that Leonardo used this full-face portrait of Christ as an opportunity to teach an apprentice his techniques, by asking the student to copy the master’s work from the left side of the painting as a mirror image on the right. After all… the right side was in shadow, and if necessary there was always the possibility of obscuring it further with more sfumato blurring – the 1510 version of Vaseline on the camera lens. The resulting two-artist painting is powerful, mysterious and both aesthetically and spiritually moving. In this disciplined exercise the apprentice learned a great deal from the master, and so can we when we deeply concentrate upon the transcendentally beautiful “Salvator Mundi.”