GLOBAL CLIMATE CHANGE IS BURNING OUR HOUSE DOWN

While the G.O.P. Candidates Are Only Concerned with SEX! 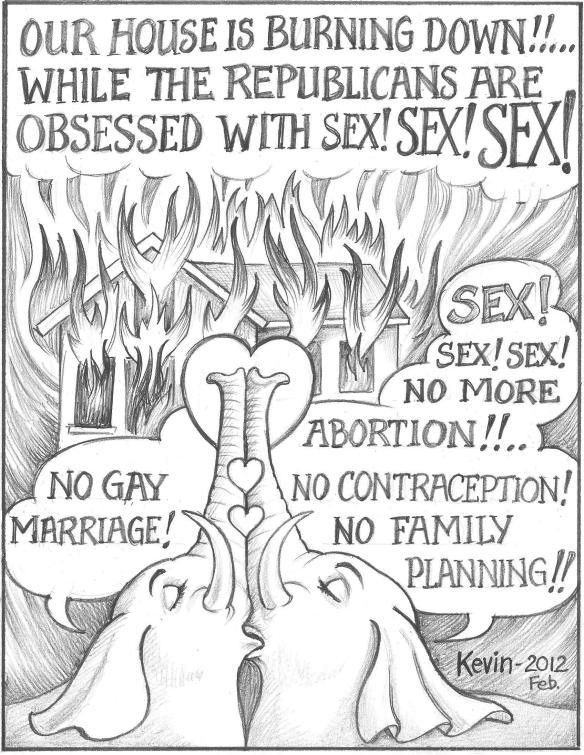 This morning at 8 am in his shirt sleeves Robert chased our dog Scrappy through the woods. Today is Feb. 23, 2012, in a part of the country that should be under lots of snow and ice right now. At 9 am we sat by the pond and watched our koi and other fish swimming about, as we basked in the warmth of springtime weather. The koi are supposed to be hibernating, buried in the mud, but our pond has not frozen over at all this winter – the first time that has ever happened, as far as we know. On our walk back up to the house, we noticed that our hydrangea bushes have started to leaf out. Yesterday Robert saw a forsythia bush covered with yellow blossoms in someone’s front yard. Both today and tomorrow the weather forecast calls for a high of 58 and a low of 45. For the following week the highs are expected to average 50 degrees. Again… This is February in snow country!

Some people tell us to “Just relax and enjoy the beautiful weather!” And we do… It really IS beautiful… but is it right?! Does this weather seem right to you? Does it worry you that we have not had a real winter this year? The leading character in “Jurassic Park,” responding to the delight of others over seeing dinosaurs, comments, “It’s all fun and games until the screaming starts!” That’s how we feel about the weather. It’s hard to relax when the implications of Climate Change are so dire for the continuation of life on our beloved, beautiful planet.

But Republicans and the G.O.P. candidates never comment about Climate Change if they can avoid it, and then only to scoff at our concern and discredit the science being urgently broadcast by climatologists all around the globe. Instead, what are these radical, extreme right wing Tea Party Republicans and G.O.P. candidates talking about? While our house is burning down, they are obsessed with SEX! SEX! SEX! They are demanding an end to contraception! REALLY?! Are we REALLY questioning citizens’ right to contraception in 2012 – let alone the imperative to curb planetary population explosion?! They have gone far beyond their constant drum beat of war against abortion to demand an end to family planning and to suggest policies and procedures that would actually invade a woman’s body and rape her with legally mandated vaginal probes! Unbelievable! And, of course, they are utterly against gay marriage, but their growing focus on the private lives of GLBT citizens in our society borders on unnatural obsession.

When your house is on fire, you don’t waste time criticizing your neighbor for the way s/he conducts her or his love life or plans a family. In fact, when your house is on fire, you focus all your attention on saving the house and everyone in it before you do ANYTHING else. If American society and the human race as a whole does not immediately turn its attention to stopping and reversing Global Climate Change, we won’t have the luxury of addressing other issues that we think are important, because our house will have burned down, along with everyone in it. Let’s get our priorities right and start focusing on this huge fire!

4 thoughts on “OUR HOUSE IS BURNING!”